Over a hundred years ago United Methodists visited a different kind of place for vacation. It was called an assembly. Starting in the late 19th and continuing into the early 20th century, assemblies were built around the country. Their purpose was to provide a place of relaxation, renewal and education for the entire family. Almost always built in rural areas, or at least away from the cities, they provided a welcome respite for the family. 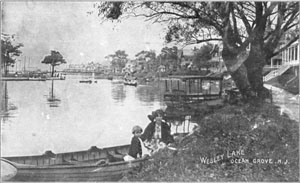 Places like Chautauqua in western New York, Ocean Grove and Ocean City, along the coastline of New Jersey, Lake Junaluska in the mountains of North Carolina, Lakeside in Ohio, Gulfside in Mississippi and Mt. Sequoyah in the Ozarks of Arkansas, and many others provided relaxation, spiritual renewal and fun for the family.

In their earliest days several had buildings which were evocative of the old camp meeting sites. But they were different from a camp meeting. Thery had, of course, religious services and meetings. But they also had recreation sites, with boating, swimming, nature walks and boardwalks. Families could enjoy a variety of recreational activies, hear educational and religious lectures and attend choir sings and listen to evangelists.  A full range of events were planned out over the summer season. And while the assemblies were located in the rural countryside they had all the modern conveniences. All were accessible by train. On well-planned streets, all had cottages or houses which could be rented and there were hotels.  Many of the assemblies were on the ‘cutting edge’ of their time. The latest ideas in Sunday School education were tried out first at places like Chautauqua. And having a place for the entire family to visit and relax was also new and novel for many; it was a real vacation.

So, one hundred years ago, people came to the assemblies to relax, to be renewed in their faith and to enjoy the summer breeze.