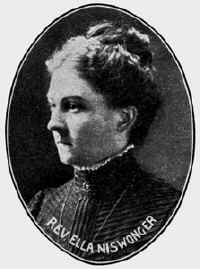 Niswonger was converted on December 22, 1880, and joined the United Brethren Church on January 2, 1881.  She graduated in the regular course of Union Biblical Seminary (now United Theological Seminary), Dayton, Ohio, on May 4, 1887, and was ordained by Bishop E. B. Kephart on September 11,1889 in the United Brethren Church.  Ella was the first woman to serve as ministerial delegate to the General Conference held in Frederick, Maryland in 1901.  She received a quarterly conference license in August 1887, and became a member of the Central Illinois Conference.  Her work as pastor began the following month at Streator, Illinois.  She served there continuously, except for a brief stint with the Kansas Conference, until 1940 when she retired on account of the illness of her sister.

Reverend Niswonger died in Springfield, Illinois on August 2, 1944 at age seventy-nine. Her funeral was conducted at the First United Brethren Church in Springfield, and interment was in the Parish Cemetery at Arlington, Ohio.