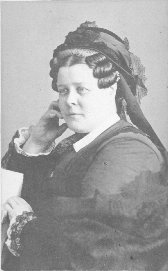 Margaret Newton Van Cott was born in New York City on March 25, 1830.  She was the eldest of four children to William K. Newton and Rachel A. Primrose.  Her father was a wealthy real estate broker.  Margaret's training was strictly Episcopalian.

She met Peter Van Cott in the Winter of 1847 and married him in January 1848.  They had two girls, Rachel, who died as an infant on New Year's Day 1852; and Sarah Ellen Conselyea, who was born later the same year.  Van Cott was deeply involved in her husband's wholesale pharmaceutical business, actively peddling patent medicines throughout the New York and New Jersey area.  After his death, she supported her family with these skills as a successful salesperson.
She joined the Methodist Church, and had an experience of conversion which was described thus:

"On the way to work one morning she suddenly heard a voice calling on her to turn over her life to the Lord. That moment she stood on the pavement in front of Old John-Street Methodist Episcopal Church, and from heaven light streamed in upon her soul. She was soundly, powerfully converted."

Later in a discussion with her husband, Peter, and the pastor of the Duane Street Methodist Episcopal Church whose first name was John, she first uttered the words which, until her last days, were her manifesto of independence,

"I believe my tongue is my own, John, and I will use it when I please, where I please, and as I please."

In 1866 she visited Durham, New York where she made her first public address in a school-house.  She followed with others, and many conversions seemed to give her efforts the divine endorsement.  In September 1868 she received an exhorter's license from the Reverend A. C. Morehouse, which empowered her to conduct prayer meetings and to exhort; and on March 6, 1869, the quarterly conference of Stone Ridge, Ellenville, New York, gave her a local preacher's license.   In her first year of itinerancy five hundred souls were brought to Christ who became members of the various Churches in the area.  On her 50th birthday, in 1880, it was said that she had traveled 143,417 miles and held 9,933 revival meetings.  During this time she preached 4,294 sermons.  Her remarkable career as an evangelist lasted from 1866 until 1912, by which time she was known throughout the United States.
It is said that "She had the stature and bearing of a queen, and a voice of strength and sweetness, such personal gifts as impress and control an audience, and her word has always been attended with excellency of power."  Margaret Newton Van Cott died on August 29, 1914 at the Olney Home in Jefferson Heights, Catskill at the age of eighty-four.