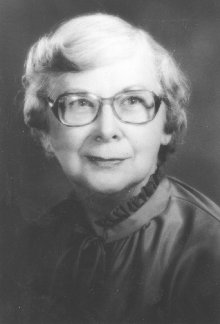 Marjorie Matthews was born in Onawa, Michigan on July 11, 1916.  She married early and lived on Army posts during World War II.  Divorced after the war, and with a young son to support, she obtained an administrative position in industry.  For seventeen years (1946-1963) Matthews was employed by an auto parts manufacturer.

The Bishop earned a Bachelor's Degree from Central Michigan (1967), which she followed with a Bachelor of Divinity Degree from Colgate Rochester Divinity School (1970).  Matthews earned both a Master's Degree in Religion and a Doctorate in Humanities from Florida State University (1976).

In 1959, Matthews decided to enter the ministry. She was ordained an elder in 1965 at the age of forty-nine.  While pursuing her education, she served as pastor of a number of small churches in Michigan, New York, and Florida.

As her experience grew after ordination, she was selected for the position of district superintendent - the second woman in the denomination to attain that role.  Although she says she never intended to be a bishop, her election was endorsed by three annual conferences.  After twenty-nine ballots, two bishops were elected by acclamation on the thirtieth ballot at the North Central Jurisdictional Conference on July 17, 1980.   One was a senior male pastor, Emerson Colaw.  The other was Marjorie Matthews - a four-foot, eleven inch grandmother.  The episcopal stole that was hung around her neck at her consecration as bishop was designed for a six-foot man, so it hung down her robe and continued along the floor.  Her firmness as an administrator was tempered by her warmth and humanity.  She was the first woman elected bishop of any mainline Christian church.  Bishop Matthews served the Wisconsin Area for four years, retiring in 1984.

Bishop Marjorie Matthews died of cancer on June 30, 1986 at the age of sixty-nine. She was survived by her son, William Jesse Matthews, and three grandchildren