The First Female District Superintendent in The Methodist Church - 1955 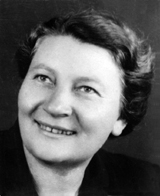 Paula Mojzes was born in Magyarboly, Hungary. She had eight years of formal education and worked as a bank secretary in Osijek, Croatia.  In 1934 she married Anton Mojzes, who was a minister of a Protestant church in Osijek, Croatia. They lived there until 1941, when World War II reached Yugoslavia.

After World War II she found herself working with the Methodist in Yugoslavia. While the Rev. Georg Sebele was the District Superintendent of the Yugoslav Methodist provisional conference he emplyed Paula as the church secretary. In time Paul and a small group of women called "church sisters" began to assist Sebele in church work.  Often the Yugoslave militia would turn them back from their destination without allowing them to visit, or they would interrupt their worship services. In 1955 Sebele died suddenly and the bishop appointed Mojzes to serve as the acting superintendent in addition to her duties as the secretary of the church administration. She remained in this position until 1957.