Gilbert Haven (1821 - 1880) was a radical abolitionist and strong advocate for civil and social rights.  He came of age at the height of the social and civil tensions which lead to the Civil War. 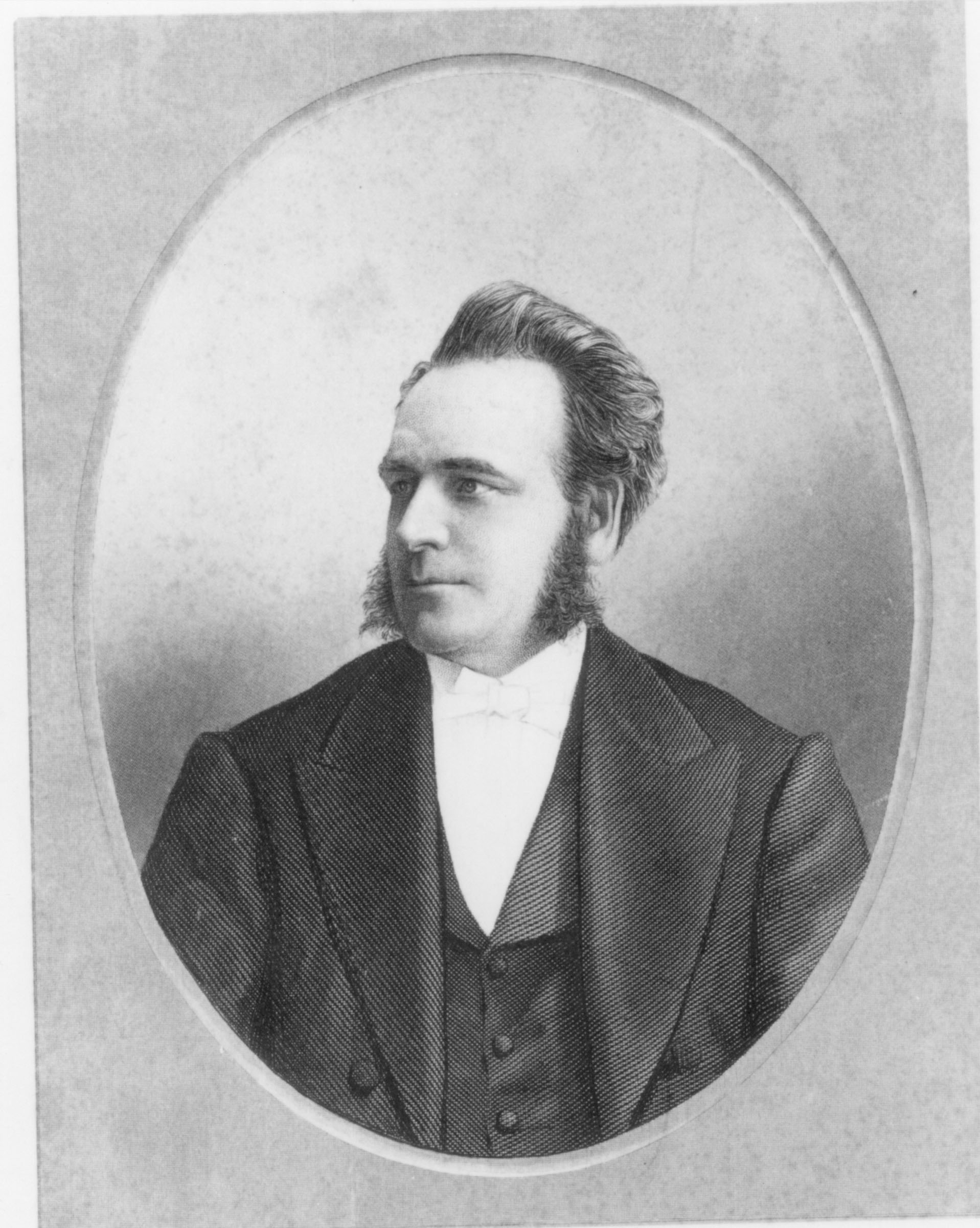 orn at Malden, Massachusetts on September 19, 1821.  He attended Wesleyan University in 1846, just two years after the Methodist Episcopal Church had divided into regional bodies over the issue of slavery.   In 1851 he joined the New England Conference of the Methodist Episcopal Church amidst the hardening attitudes of the country’s response to  the Compromise of 1850 which  foreshadowed the coming conflict.   Haven’s life and ministry would revolve around the issue of freedom and  justice, first for the abolition of slavery and then for the securing of just civil and social rights for the African Americans and for women.   He became editor of “Zion’s Herald.”  He was elected bishop in 1872, selecting Atlanta, Georgia as his episcopal residence.  He worked hard to keep the new conferences created by the Methodist Episcopal Church in the south integrated, but was unsuccessful in his endeavor.  He worked closely with the Freedmen’s Aid Society.  He died January 3, 1880.

Haven’s world was defined by the tension and division within American life over the issue of slavery. 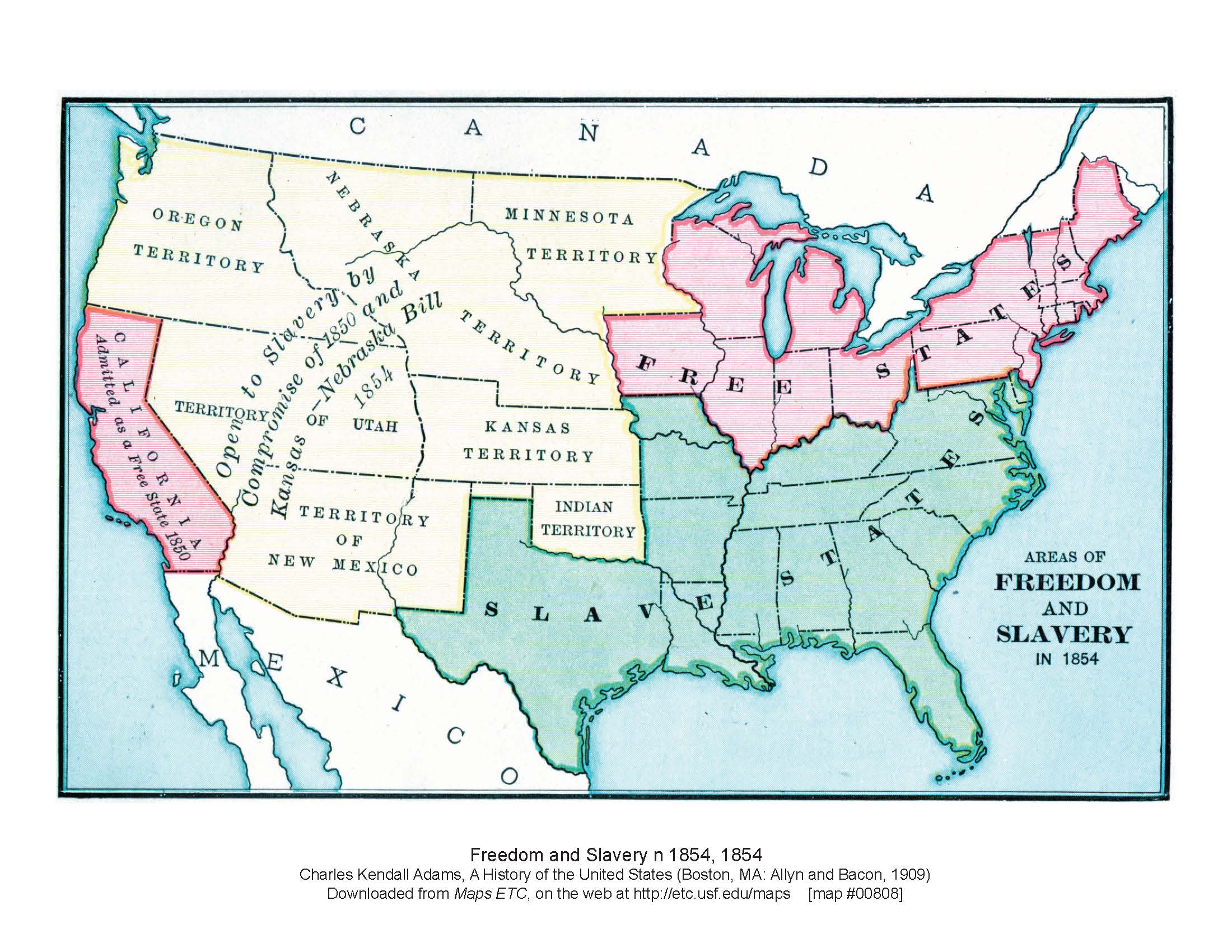 Haven from the very beginnings of his ministry dealt with the issue of slavery, injustice and freedom.  He was very disappointed in how the church had become compromised by slavery.  But for all of Haven’s  criticism of the churches for their moral failure he never reached such a crisis over the issue as to contemplate seriously a rupture with his own denomination.  Nor did he in religious sentiment question the authenticity of the Christian faith, even though it had often been perverted to justify and sanction slavery.  Because the church should set a moral example for society, Haven was convinced of the necessity of church reformation.  He was clearly  a reformer from within the institution.

By joining social criticism and political involvement to religious reformation  Haven represented a distinctive anti-slavery and racially equalitarian position, designated by his contemporaries as "Christian abolitionism."  The first major tenet as Haven saw it was the contention that chattel slavery was a sin per se, that the system of slavery and not merely its attendant evils was immoral. Haven maintained that slavery was . . ." the greatest sin of this or of any age."

Besides proclaiming the sinfulness of slavery, the duty of emancipation, and the rejection of social and religious justifications of the institution, Haven argued on behalf of racial equality.   It was these positions which often put him at odds with the denominational leadership of his day. 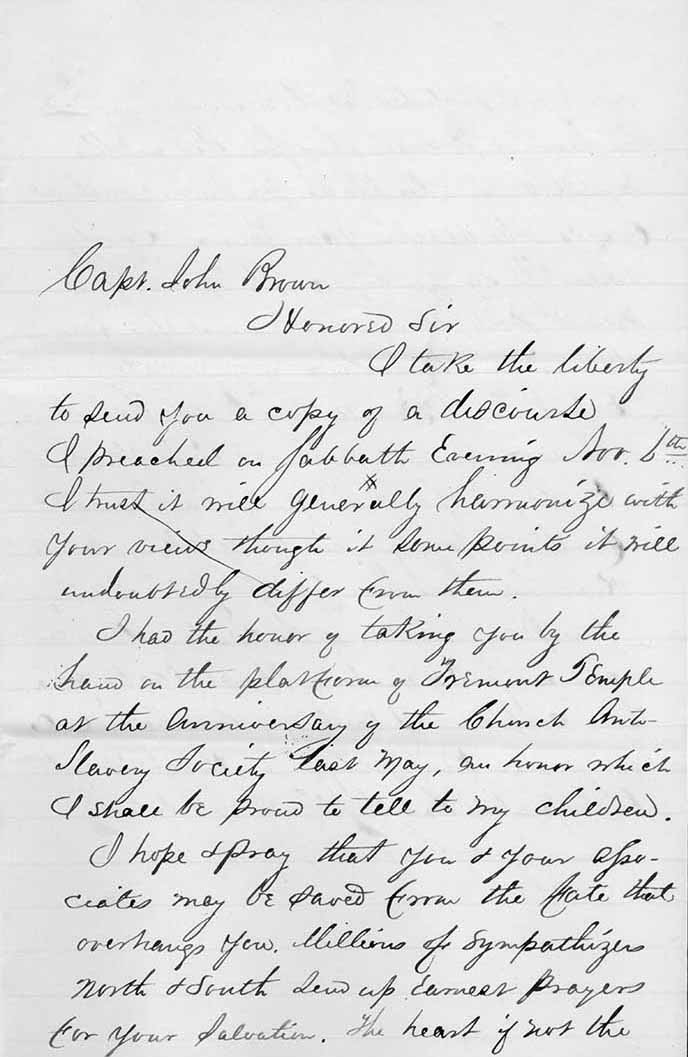 most interesting letter from this time period is a letter to John Brown while Brown awaited  execution.  It was written in late November of 1859.   It  gives a sense of the emotion across the nation caused by  Brown’s action.  A few points are worth noting.  Haven mentions having met Brown at an abolitionist meeting at Tremont Temple Methodist Episcopal Church in Boston.  This is the same church which a decade later would see the founding of the Woman’s Foreign Missionary Society of the Methodist Episcopal Church.   The church has seen some significant history.  Haven also enclosed a copy of a sermon he preached for Brown to read.  He says he gave the sermon the 6th of November, which points to a sermon he gave entitled The Beginning of the End . Haven later published this sermon in a collection called National Sermons: Sermons, Speeches and Letters on Slavery and its War. The collection was published in 1869.  The sermons were given over a period of years from 1850 until 1868.  And finally it is worth noting how Haven sees Brown as a martyr- one who has “... washed their robes and made them white in the blood of the Lamb.”   This is probably as close to claiming someone a saint as a Protestant could.  Haven was not alone in this sentiment as David Thoreau had written similar ideas in a plea for Brown’s life.    See here for a transcript of the letter.

We do not know if Haven actually mailed the letter and it was later retrieved by him, or if this is a draft and he sent a clean copy to Brown.  The lines of text that are crossed out could imply that it was a draft.  But in fairness crossing out lines of text in a letter was not uncommon; many of Haven’s incoming letters from friends show the same practice.

During the Civil War Haven continued advocating a civil inclusiveness, especially in the church as well as in society.  In 1862 he took a trip to Europe to rest and to restore his health following the death of his wife.    The letter from his cousin, Erastus Haven was written at this time.  It is worth noting that the letter, which is full of despair about the war,  was written just a few short weeks before Antietam; which was enough of a turning point that Lincoln  felt justified in making the Emancipation Proclamation.

Haven also  attempted to include the leadership of the Missionary Society in his plans for a more inclusive society. Bishop Ames’ response was to order Haven to Vicksburg in 1865 as a missionary.   The appointment was seen as an attempt to silence Haven.  The appointment did not happen but the resulting controversy left Haven exhausted.  Bishop Ames would later be supportive of African American ministers in the New England Conference, which Haven also supported, but the motion was finally nullified by a provision that only asked the conference to “do all that was in its power to secure acceptance” for such appointments.

Haven would also spar with Bishop Mathew Simpson, the leading cleric of the denomination.  They continued to clash even after Haven’s surprise election to the episcopacy in 1872.  Simpson’s long letter to Haven in the display is mostly about appointment making - the assignment of pastors to their churches.  It may well represent the way new bishops learned their craft.  But the purpose of the letter may well be to try to deter Haven from taking up residence in the South.  The General Conference of 1872 had selected a handful of new cities which could be episcopal residences and left the choice of city up to the newly elected bishops.  Haven selected Atlanta, which many, including Simpson, feared conflict or worse.   Simpson wanted Haven to go to Minnesota.  It is interesting that he did not order Haven there.  Apparently he did have the authority to move Haven about.    So Haven worked in the South among the newly created MEC annual conferences.  He struggled to keep them integrated.  A battle he would lose in 1876 when the General Conference would allow conferences to divide along racial lines and denied the request of an African American church in New York City to transfer to the New York Conference from the Delaware Conference.

Haven had conflicts with many of the leaders within the denomination.  This also included Randolph Sinks Foster, later a bishop.  Foster felt that Haven was trying to get the denomination to change too fast.    But, it was Foster, alone of all the bishops, who made it to Haven’s home as he lay dying in 1880.

Haven helped to establish Methodism in Mexico, and visited overseas conferences, including Liberia.   He worked closely with the Freedmen’s Aid Society, a Methodist Episcopal Church agency, which established schools, training centers, medical institutions in the South.   Haven worked closely with Meharry in Nashville.

The Haven Papers are comprised of over one thosand documents including letters and sermons from 1840 until 1880.

This display was curated by  Robert Williams, Mark Shenise and  Dale Patterson