Methodism and the Evangelical United Brethren Tradition had a long history of theological education; both formal and informal. In 1972 a new section was added to the Discipline entitled "Our Theological Task."  For the first time in its history the denomination made a formal statement on how such a large varied denomination could do theology; what our common tools and common assumptions are.  The acceptance of the ‘Theological Task’ marks the beginning of a new theological pattern in the denomination known as the Wesleyan Quadrilateral. Albert Outler’s description of Wesley's theological method as a combination of Scripture, Reason, Experience, and Tradition as tests for theological reflection created a 'wesleyan theological method' and  set off a discussion that continues down to today. The new ‘tradition’ raised many questions: Did the quadrilateral actually reflect Wesley’s method? What weight did it give to the four points? How should they be applied to different types of theological traditions? Discussed in the universities, the seminaries, as well as in many local churches, it became apparent that the popular concept raised as many questions as it answered. In effect, it got the denomination to reflect on how it does theology as well as the way it should do theology.

In 1988, an updated version of the “Theological Task” was accepted by the General Conference. The new statement clearly kept the four touchstones of the original quadrilateral while it emphasized that Scripture was the primary - instead of a ‘first among equals’ - when doing theology. While the same thought had been expressed in the 1972 statement, the 1988 statement made the position much clearer. Theology, then, was to find its source in Scripture, while Tradition, Reason, and Experience were to help in the understanding and still act as a check as one did theology. While Scripture was made the primary source, there was no statement on the nature or understanding of Scripture. It was a source, but a source which could still be viewed and understood in a myriad of ways. So, the denomination affirmed a variety of ways of doing and understanding theology while calling us to recognize that we are part of a larger tradition in a modern world. 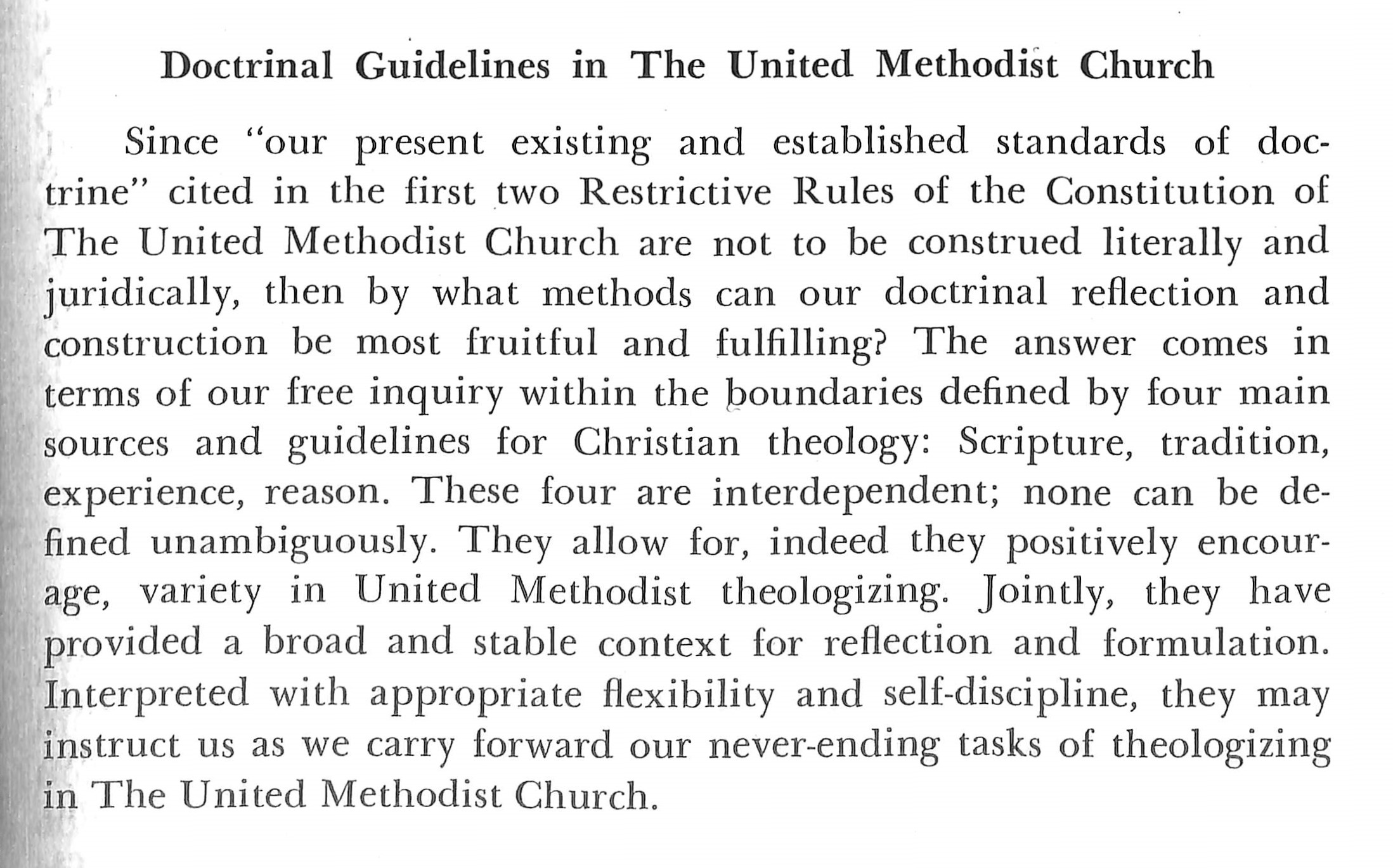 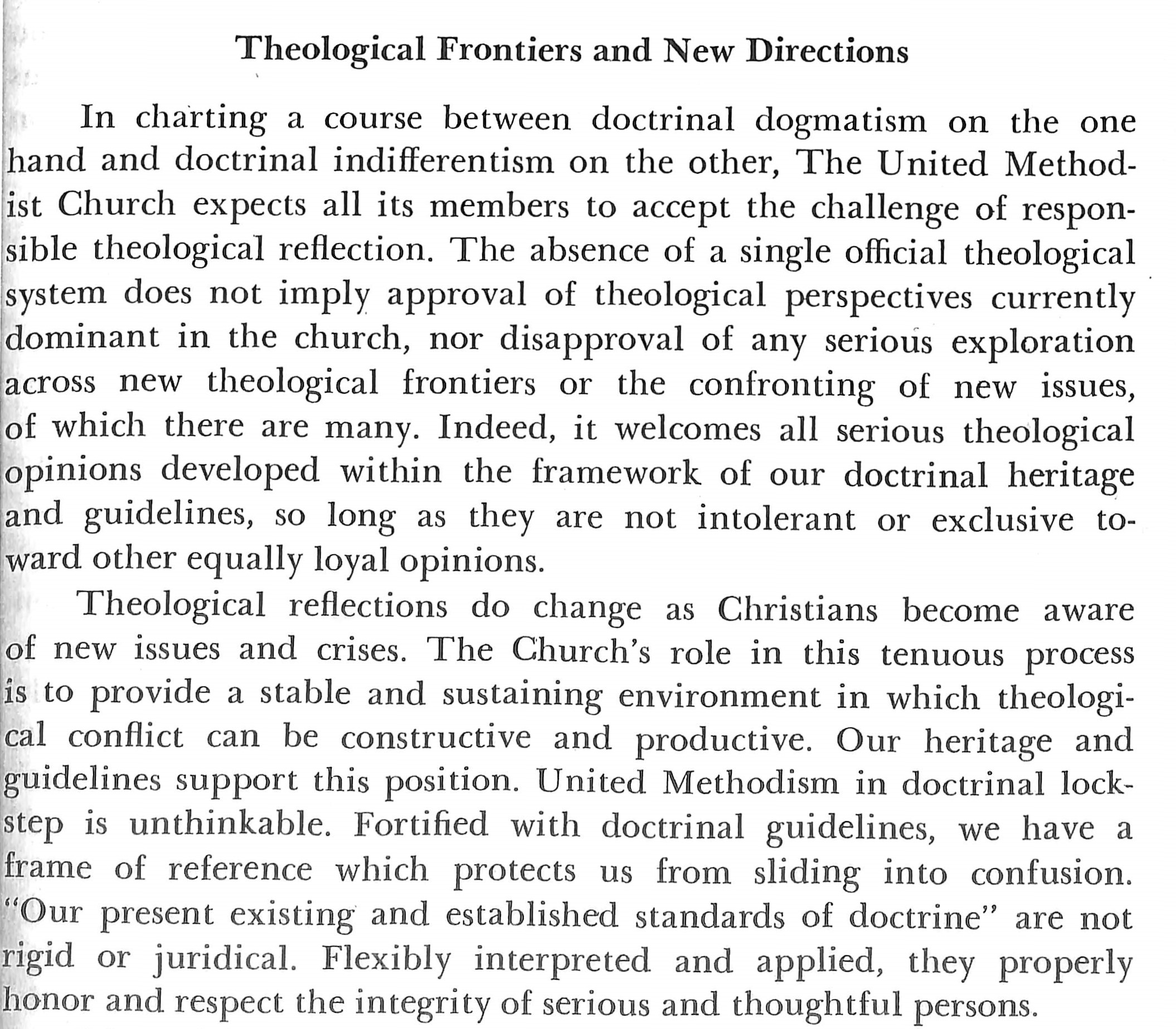 Development of the Wesleyan Quadrilateral

The Quadrilateral identifies four key Wesleyan elements in doing theology: Scripture, Reason, Experience, and Tradition. What is seen here are the opening and closing sections summarizing the quadrilateral 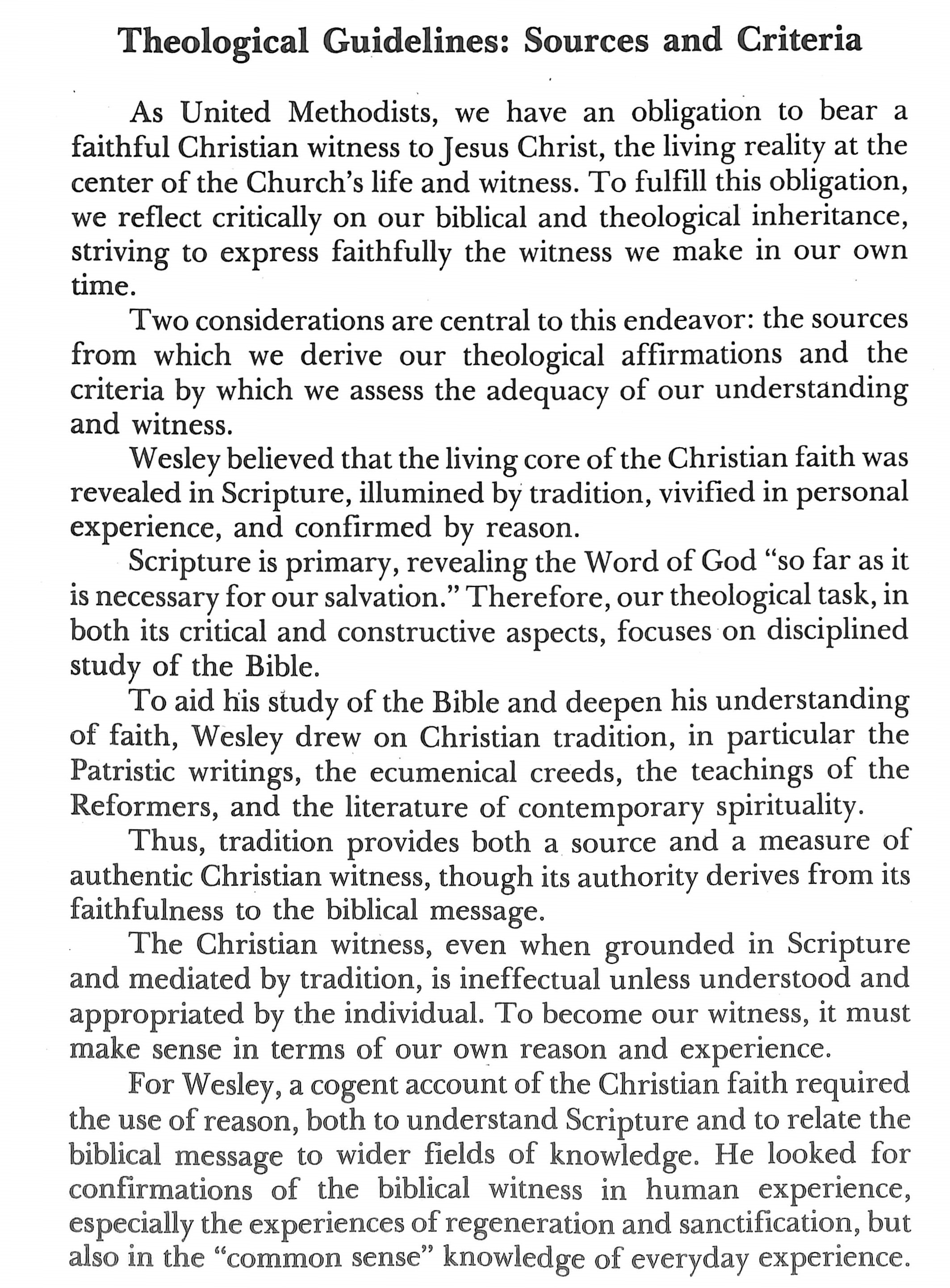 1988 version on Theological developments:
A creedal perspective.
From quadrilateral to the primacy of Scripture with three supports: 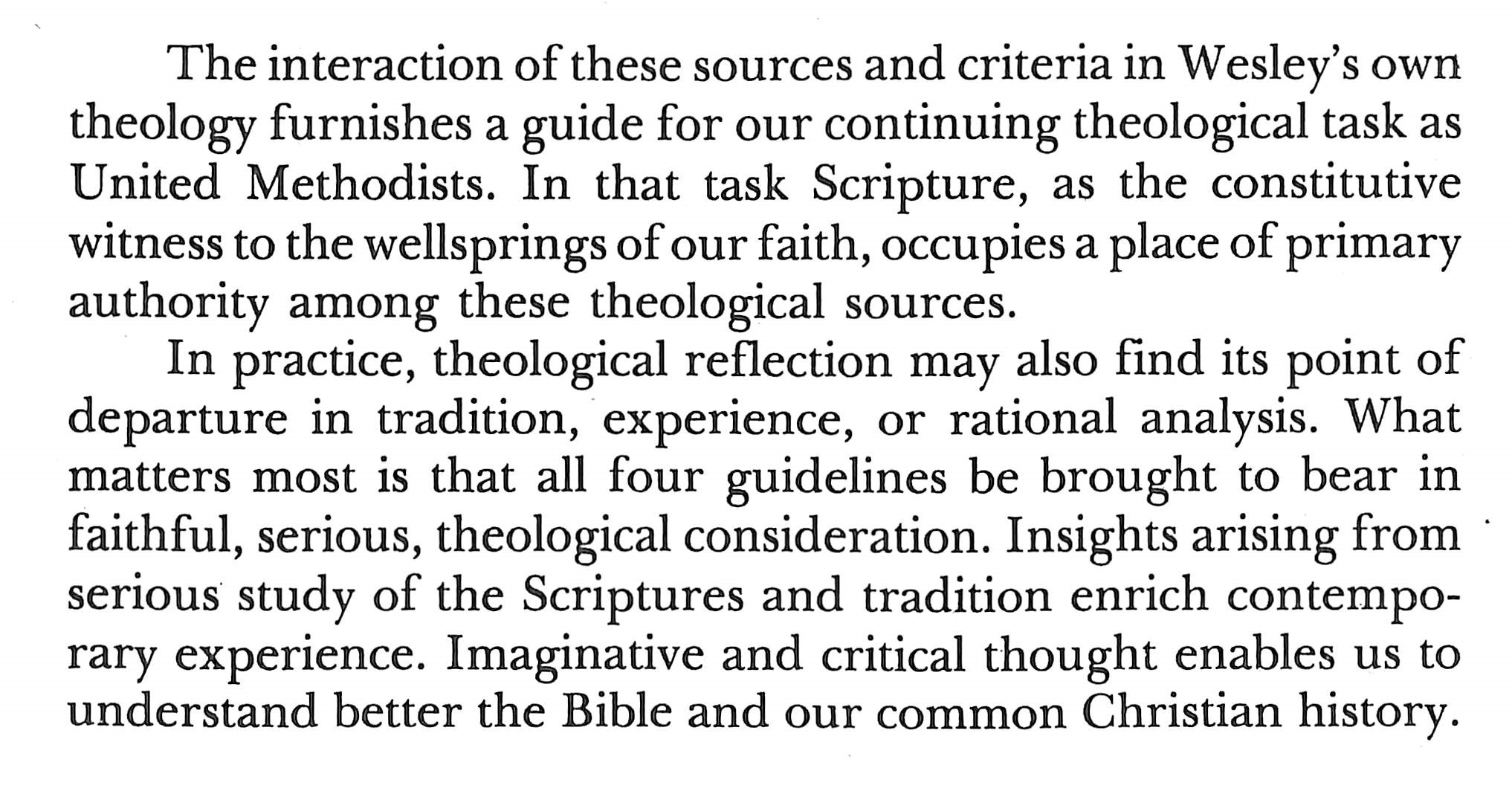 Scripture is the primary source for theology but must be filtered through Reason, Experience, and Tradition.

Discussion on our theological standards is not new.
In the 1808 General Conference, a motion was made that Wesley’s standard sermons and ‘Notes on the New Testament’ should be understood  as part of the theological foundation of the denomination. The motion failed and immediately afterward the General Conference struck the entire discussion from the record.

Tuesday May the 24th 3 O’Clock PM
Moved by Francis Ward and recorded by Lewis Myers, that it shall be considered as the sentiment of this Conference, that Mr. Wesley’s Notes on the New Testament, his four first Volumes of Sermons and Mr. Fletcher’s Checks, in their general tenor, contain the principal doctrines of Methodism, and a good explanation of our articles of religion; and that this sentiment be recorded in our Journal without being incorporated in the Discipline. [motion] lost

(In the margin it is written:) N.B. It was voted that this motion be struck out of the Journal