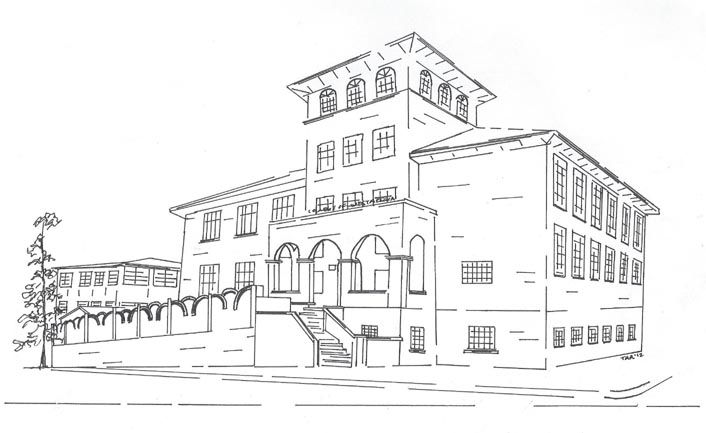 The College of West Africa (CWA), a college preparatory high school in Monrovia, Liberia, and the second oldest secondary school in the country, has prepared leaders for all levels of government, business, and social services. Several well-known people, including current President of Liberia, Ellen Johnson Sirleaf (first female President of Liberia), and current Vice-President, Joseph N. Boakai, are graduates of the College of West Africa.

The school was first envisioned by the Rev. Melville B. Cox, the first missionary to be sent to a foreign country by the Methodist Episcopal Missionary Society. Cox set sail in November, 1832, and arrived in Monrovia on March 8, 1833. Only three days after his arrival, he entered four goals for his ministry in his Journal, the third being:

3. To establish a school here [that is at Monrovia] which will connect with it agriculture and the arts. I propose the Maine Wesleyan Seminary [now known as Kents Hill School] as a model as near as may be. There should be a large farm which should in a few years support the whole school. There must also be shoemakers, tanners, blacksmiths, carpenters, etc.

Though Cox only lived four short months after his arrival in Liberia, he did manage to establish the Methodist Episcopal Church of Liberia and those who followed eventually carried out all of his goals, including the establishment of a school. CWA, organized in the 1830s, and formally opened in 1839 as the “Liberia Conference Seminary” with Jabez A. Burton as the principal, eventually became known as the “Monrovia Seminary.” For many years the school offered both elementary and secondary classes.

In 1898, the Conference authorized a reorganization of the educational program so that much needed courses in normal and ministerial training could be offered. The name of the school was changed from “Monrovia Seminary” to the “College of West Africa.” In 1904, the school was granted a charter with the “aim to impart thorough and practical knowledge in the following departments: Collegiate, Theological, Industrial, and Normal.” The college was also authorized to grant degrees. For about twenty years liberal arts courses were offered with a degree after successful completion of four years’ work. In the late 1920s, R. L. Embree reorganized the program of the school, limiting its instruction to the high school level. It remains today as a college preparatory high school serving about 1,400 students. During Embree’s administration a spacious and well-constructed building, “Cox Memorial,” was dedicated in 1933, on the centennial of the arrival of Melville B. Cox. The school stands today as a lasting memorial to Cox’s memory. It is a sister Heritage Landmark to the Cox Memorial United Methodist Church in Hallowell, Maine, USA, the home church of Melville Cox.

For more information regarding the current high school program, go to http://ethertontech.com/ilab/2011-summer-web-challenge/CWA.

Points of interest at this Heritage Landmark: At the 2011 Liberia Annual Conference, the College of West Africa was approved as United Methodist Historic Site #457, one of only six such historic sites outside of the United States. The historic site marker can be seen on the inside wall facing the front door of the school.

Before he sailed for Liberia, Melville Cox told a friend that should he die in Liberia, the friend should should write his epitaph. “What,” asked the friend, “should the epitaph say?” Cox replied, “Let a thousand fall before Africa be given up.” A stained glass window dedicated to Cox and his ministry, including his immortal words, can be found in the school’s auditorium.

Area attractions: Just down the block on Ashmun Street is the First United Methodist Church of Liberia, the first Methodist church in Liberia, which was founded in March, 1822, by some members of the first contingent of 88 settlers that sailed from Baltimore, Maryland, USA, to locate a home for black Americans as a part of the newly organized Colonization Movement. This is the home church of Liberian President, Ellen Johnson Sirleaf.

Just a few blocks down Center Street is the Palm Grove Cemetery in the middle of the city of Monrovia where Melville B. Cox and other early missionaries are buried. Cox’s gravesite has just been restored by the staff of the College of West Africa after a part of it had been stolen.

Location: CWA located in downtown Monrovia at the corner of Ashmun and Center Streets.

Food and lodging: Various places in the area. Details are not available.

Directions: Should be available in Liberia.

To learn more about United Methodist history in this area: Current Bishop John W. Innis is in the process of writing the first history of Methodism in Liberia. When this book is completed, it will give a comprehensive view of the development of Methodist in this country.